Octopus! got a “Recommended” review in this month’s Library Journal! Check it out:

“Courage (contributing editor, Scientific American) conveys the many attractions and fascinating features of the octopus as she investigates its anatomy, physiology, reproduction, food hunting, and life cycle. Related to squids, cuttlefish, snails, slugs, and oysters, octopuses live all over the world, in shallow water as well as on the ocean bottom, but their elusive nature makes them almost impossible to study in the wild. Widely valued as food, they are also the subjects of scientific research related to aspects of their octo-physiology, such as their camouflage abilities. Their eight independently controlled arms are being studied by biorobotics researchers. Courage travelled widely to interview fishers and scientists in U.S. and European research laboratories to produce this well-written, accessible book. She shows her wonder at the intelligence, playfulness, and curiosity demonstrated by these invertebrates. Courage notes that lab scientists acknowledge the unique personalities of octopuses by giving them each a personal name and that the UK and European Union both have directives to protect octopuses from scientific experiments that may cause pain or suffering… This book will whet the interest of students and the general reader. Recommended.” Judith B. Barnett, Univ. of Rhode Island Lib., Kingston 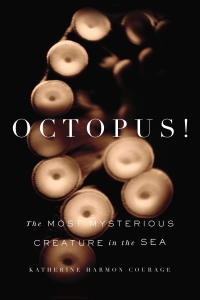