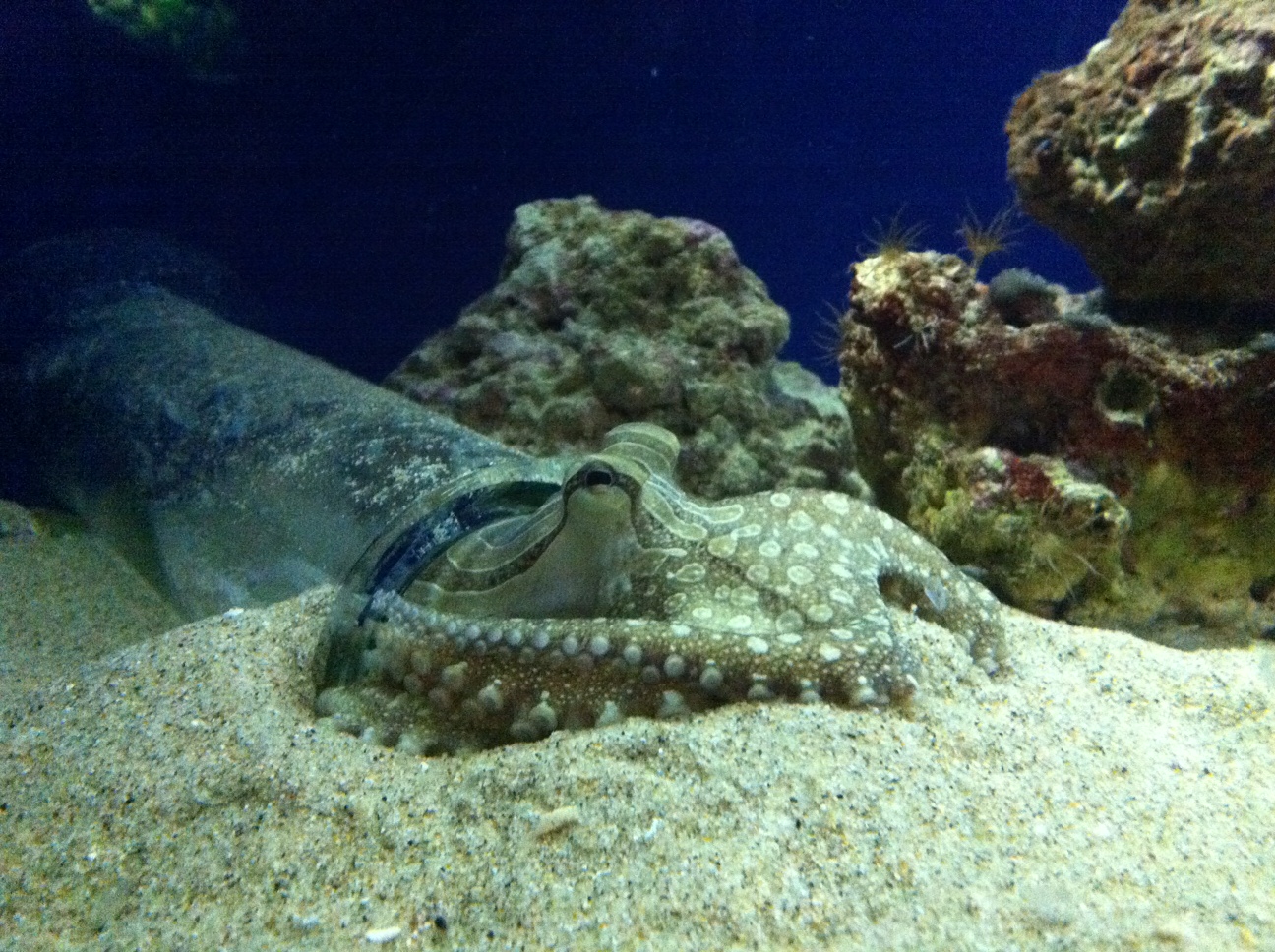 Most octopuses prefer the solitary life. Some have even been known to eat their mates. But a newly discovered species of octopus is disrupting this long-held model.

The larger Pacific striped octopus (still so new to science it does not yet have a formal Latin name) was first spotted some 40 years ago. But its behavior, reported then by Panamanian researcher Arcadio Rodaniche of the Smithsonian Tropical Research Institute in 1982, sounded so outlandish that most in the scientific community wrote it off. Now, researchers have been studying these small but wondrous creatures in captivity for more than two years, and the team has at last presented their findings today in the journal PLoS ONE.

Perhaps the most striking finding about this striped octopus is its mating behavior. In many species, the male octopus will attempt to mate with the female from a distance (sending his sperm packets over to her along a specialized arm)–or detach his arm altogether to give to the female while hightailing it to safety–in an effort to avoid being maimed or eaten. But the larger Pacific striped octopuses come together, beak-to-beak, spreading their arms out, with suckers touching, a position that would be considered foolish for most other species. These rule-breaking octopuses have also been observed cohabitating and even sharing meals.

But the larger Pacific striped octopuses come together, beak-to-beak, spreading their arms out, with suckers touching, a position that would be considered foolish for most other species.

And rather than lunging upon their live prey as most octopuses do, the larger Pacific striped octopus seems to sneak up on shrimp, startling it with a simple tap of the arm. “I’ve never seen anything like it,” said University of California Berkeley professor Roy Caldwell in a press release. And when they’re finished with their food, they are quite tidy about their scraps: “The remains of prey items were forcefully ejected from the immediate vicinity of the den entrance,” the researchers noted in their paper.

I was lucky enough to observe this and other quirks of these charismatic cephalopods during a chat with Richard Ross, one of the co-authors of the paper and a cephalopod-tattooed biologist at the California Academy of Sciences a couple of years ago.

In addition to their curious, unoctopusly behavior, these animals also have unusual life histories. Most documented species of octopus die soon after reproducing–males after fertilizing a female or two and females after brooding their clutch of eggs. Not the larger Pacific striped octopus. These females went on to lay various clutches of eggs for six months.

“The next step to understanding the unique behaviors found in the larger Pacific striped octopus will be to observe groups in their natural habitat,” Caldwell said in a press release. “Only by observing the context in which these behaviors occur in the wild can we begin to piece together how this octopus has evolved behaviors so radically different from what occurs in most other species of octopus.”

Now, decades after he first observed groups of dozens of these octopuses living together off the coasts of Nicaragua and Panama, Rodaniche shares the paper credit with Ross, Caldwell and fellow researcher Christine Huffard of the Monterey Bay Aquarium Research Institute.

The discoveries about these small, curious creatures suggests that among the hundreds of known octopus species, we might only be scratching the surface in our studies of a handful of common research subjects. “It reminds us how much we still have to learn about the mysterious world of cephalopods,” Ross said in the press release.

In other octopus news today, the first complete octopus genome has been sequenced. Read more about it in my article for Scientific American.