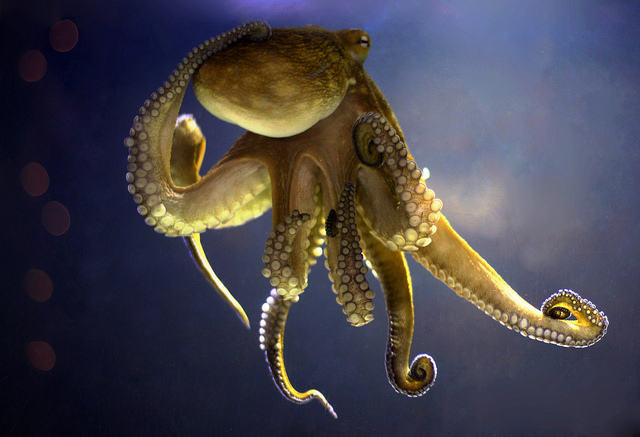 The octopus is an intelligent, curious, and clever multitasker. We two-armed humans often struggle to keep up with it.

But the pace of octopus research is accelerating. And this has been a big year for octopus science.

So to celebrate International Octopus Day, let’s see what we have learned about these amazing animals–and what they are teaching us. Here are the 8 best octopus studies of 2015 so far:

8. Stretchy steps in opposition. Octopuses can use any of their eight arms to stretch out for a step. It might just not be in the direction you expect, researchers have found. To move forward, they need only push out with a back tongue-like arm. (Study: “Octopus Movement: Push Right, Go Left“) More proof that these animals will continue to keep us on our toes.

7. How smart are octopuses? Really smart. Scientists are still scratching their heads over how a solitary, short-lived invertebrate manages all of its learning and complex behavior. Researchers present the common octopus as a model to learn about how flexible brains can be. (Study: “Learning and Memory in Octopus vulgaris: A Case of Biological Plasticity“) Some researchers think they even qualify for consciousness. Read about that here.

6. Temperature controls this octopus’s reproduction. Is it hot in here? If so, don’t count on seeing any Octopus maya babies around. Researchers have discovered that females of this octo species need ocean temps cooler than 78 degrees (F) to lay their eggs. This has some serious implications for how well this animal will fare in warming oceans. (Study: “Is Temperature Conditioning Octopus maya fitness?“)

5. Walk like an octopus. Most octopuses prefer to crawl along the seafloor over the more exhausting jet-powered swim. But how do they manage that without getting tangled up in all their arms? It’s complicated, say researchers who are studying this. But they have found some hints about coordination–no small feat when you can choose to go in any direction. (Study: “Arm Coordination in Octopus Crawling Involves Unique Motor Control Strategies“) Imagine trying to control something that can carry on even without commands from the brain. More on that here.

4. Smells like octo love. At least if you’re another common octopus. Researchers have found a link between the smell centers in an octopus’s brain and its reproductive system. And octopuses can sense chemicals floating through the water–even via their suckers. So the ocean may be filled with more love than we knew. (Study: “Role of Olfaction in Octopus vulgaris Reproduction“) Read more about this odiferous discovery here.

3. Octopuses are discriminating creatures. In their learning, that is. We know that these cephalopods are smart (they can solve puzzles and open jars). But new research this year shows that they can engage in what’s known as conditional discrimination. That is, to do one thing in the case of x+y but to do something else (or nothing at all) in the case of x+z. This cognitive leap is pretty dang impressive for an invertebrate. (Study: “Conditional Discrimination in Octopus vulgaris“) Octopuses can also use tools; read more about that here.

2. The octopus robot lives (and crawls) on… Not only are we learning about the octopus’s biology, but we are also learning how better to copy it. With robots. The researchers working on this project announced another milestone: like its muse, their soft-armed bot is now an expert underwater walker–and grasper. Watch your fingers. (Study: “Bioinspired Locomotion and Grasping in Water: The Soft Eight-Arm OCTOPUS Robot“) Read more about this amazing (and sometimes frightening) project here.

1. The octopus genome! Researchers have finally sequenced the stunningly complex and fascinating octopus genome. And it was hardly any surprise that it was full of, well, surprises. (Study: “The Octopus Genome and the Evolution of Cephalopod Neural and Morphological Novelties“) Read more about the findings and implications here.

*Some of those glasses can be water.